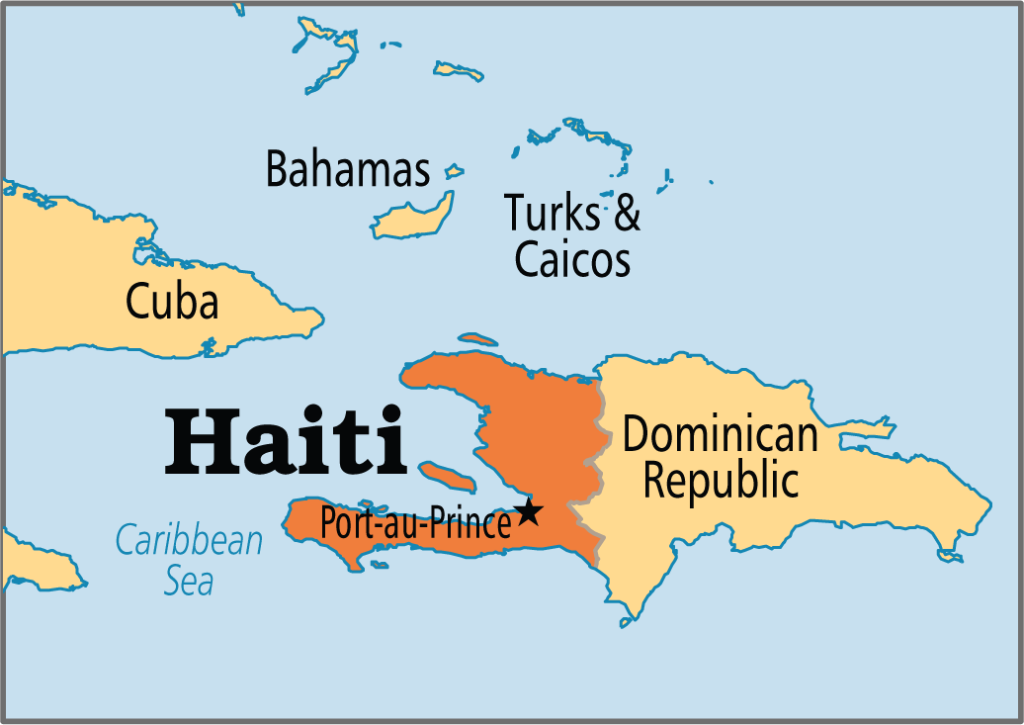 Population: Nearly 10.5 million in a country 1/5 the size of Wisconsin

Major religion: Christianity, about 50% Catholic and 40% Protestant and 10% Other

Haiti shares the Atlantic Ocean island of Hispaniola with the Dominican Republic. Hispaniola, or “Little Spain,” plays an important role in world history because it was here that Christopher Columbus landed in 1492.

Hispaniola’s climate is benign and challenging at the same time. Warm breezes and sandy beaches contrast with the fact that the island is in a frequently traveled hurricane path as well as on several earthquake fault lines. The highest point in Haiti is the Pic La Selle, measuring 8,773 feet, much taller than the highest mountains in the eastern United States.

Haiti became the world’s first black-led republic and the first independent Caribbean state when it threw off French colonial control and slavery in the early 19th century.

But independence came at a crippling cost. Chronic instability, dictatorships and natural disasters in recent decades have left it as the poorest nation in the Americas. Then, an earthquake in 2010 killed nearly 300,000 people and caused extensive damage to infrastructure and the economy.

Haiti may sound like a faraway location, but the distance between Madison and the capital, Port-au-Prince, is just 1,962 miles. This makes it an ideal place to help out, especially during cold Wisconsin winters.

The first mission trip to Haiti was in February 2009. Former parishioner, now living in Haiti, Nancy Hibbard welcomed the small group, including Fr. Jim Murphy, Sue Griep, Nancy Fictum, Kaitlyn Jones and Deacon Dennis Sutter. They toured the southwestern portion of the island, including Jérémie, Corail and Grand Vincent. The men worked in the St. Martin de Tours rectory in Grand Vincent, primarily on the electrical system. The women were involved in education in the area where Nancy was working.

One year after the earthquake, in 2011, the second mission group from St. Mary (Dan and Mallory Beirne, Nancy Fictum, Sue Griep, Fr. Jim and Deacon Dennis) visited Fond Jean Noel in the southern part of Haiti. Nancy found work for the group, translated, and introduced them to many friends. Members of the group helped in the medical clinic distributing over-the-counter medicines donated by Service Drug, joined with the older school children in painting the school, built school desks and did some minor wiring in the clinic.

In January of 2014, the third mission group from St. Mary (Nancy Fictum, Kathy Lemi, Monica Miller, and Deacon Dennis) returned to Jérémie in order to stay and work with Nancy. The women made jewelry, painted a house and made new friends in the city. Deacon Dennis installed plumbing and wired a woodworking shop that employs a good number of individuals, some handicapped, as well as youth that are eager to learn a trade. Cabinet-making, such as this, enables the young to be better prepared to enter the workforce once they finish their education.

In addition to encouraging parishioners to get involved in the Haiti missions, St. Mary has funded all or part of many projects, dating back to 2004: construction of coffee and corn mills, building chapels and schools, paying teachers’ salaries, sending much-needed school, medical and dental supplies as well as soaps and shampoos, building a dormitory for school staff and visitors, helping to finance the tent-city and associated school in Port au Prince after the quake, micro-financing for individuals starting jobs, buying and transporting computers, purchasing solar panels for several locations, a motorcycle for the priest, and providing help for  many schools. St Mary has sent musical instruments, educational materials, clothing, shoes, and many other items.

St. Mary was planning its 4th trip to Haiti for January 2017—primarily an “Exposure Trip” to gain new vision. Several individuals had committed to the trip and we were in the process of choosing a date and buying tickets when Hurricane Matthew devastated Jérémie and all of the surrounding cities and villages.